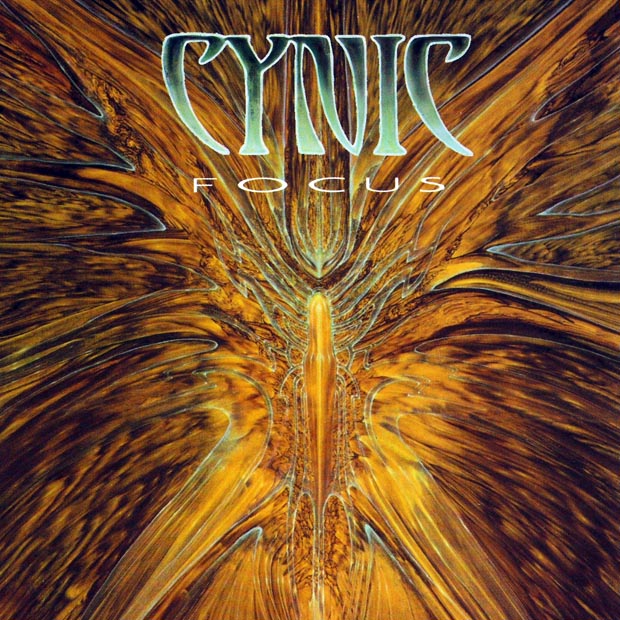 Above: Photo by Michael J. Mulley from MEAN DEVIATION of Cynic in the demo days, 1989. L–R: Sean Reinert, Jason Gobel, Tony Choy, Paul Masvidal. Okay, so this isn’t the Focus lineup, but it’s a great time capsule shot that underscores how ahead of their time these long-haired kids in bright shorts were.

In honor of the 20th anniversary of the September 14, 1993, release of Cynic’s groundbreaking and otherworldly progressive metal masterpiece Focus, we bring you a lengthy extract by Jeff Wagner from his great book Mean Deviation: Four Decades of Progressive Metal. But first—a soundtrack!

And now, a word from our author, Jeff Wagner: “Even though it was met with confusion and even some good old spite upon release, Cynic’s Focus has aged extremely well. There’s no denying its impact over the past two decades. Now that progressive music of various kinds is more acceptable in the metal universe than it was in 1993, Focus takes its place alongside a rarified set of albums that continue to sell and find new generations of fans. Right up there with And Justice For All, Human, Images and Words, and other essential pieces of brain metal.”

Nocturnus’s Thresholds and Atheist’s Unquestionable Presence and Elements are lasting, important works of progressive death metal. The last several Death albums are equally revered. But Focus, by the incomparable Cynic, is the only Florida-spawned album that equals Death’s tech-heavy and groundbreaking Human. Chuck Schuldiner spotlighted the talented band when he recruited two Cynic members to play on Human; but Cynic’s recorded work up to that point—four demos between 1988 and 1991—gave little indication of the creative strides and eventual lasting influence of their 1993 debut.

The songs on the Roadrunner demo—”Uroboric Forms,” “The Eagle Nature,” and “Pleading for Preservation”—were more fluid and memorable than previous demos, with earlier thrash metal tendencies fading from view. Cynic’s heavily traded early tapes were interesting slices of complicated, gnarled death/thrash, but the erratic song structures and lack of repeating parts only effectively blew minds on a stiff, cerebral level. The early material lacked cohesion, as Masvidal later acknowledged. “We used to have songs with a beginning, middle, and end—they would rarely repeat ideas,” he says. “With those songs we had a whole bunch of different moods within a song, whereas now we’re trying to have a song with one strong feeling.”

Even the 1991 Roadrunner demo, a taste of the direction of their imminent debut, hardly embraced a less-is-more approach. By 1993, however, when the lush, expansive, innovative Focus album finally appeared, Cynic had evolved by a few enormous steps. On a continual quest to become better players, the members had been taking lessons from jazz fusion instructors. The members’ interest in forms outside of metal music—jazz subgenres such as be-bop and fusion, classical composers like Debussy, even synth-pop like Missing Persons—contributed in part to the maturation displayed on Focus. But an unpredictable, destructive act of nature proved to be a more significant catalyst. Hurricane Andrew ravaged southern Florida in August 1992. Despite the resulting havoc, Masvidal calls the calamity “a blessing in disguise.”

“It literally wiped out southern Florida,” he says. “Leveled it, including Jason’s whole home. We were watching trees fly by. It was just totally surreal, like out of a movie. Everything was destroyed, including our rehearsal studio. We had to start over. But it was so great, because I locked myself back up in my room and got to work and focused on what needed to be done. We all made leaps and bounds as musicians, and I got to the core of the Cynic language. It was in that year that we refined everything.”

The results bore little resemblance to the Florida death metal scene that nurtured the band. Like Cynic’s demos, Focus was complex and technically proficient, but the comparisons ended there. Focus carried a sense of elevation, of sublime musical journey. Eight songs followed an airy and accessible flow that belied the music’s many complexities. Technicality was no longer the be-all and end-all—now virtuosity was simply the means to an end, first and foremost serving the songs. The gauzy guitars sounded softer than previous recordings, even somewhat distant. The propulsive rhythms and contrapuntal guitar layering shared as much with intense jazz fusion as with metal. The material’s only literal link to death metal was the occasional raw vocal passage, performed by briefly enrolled Cynic member Tony Teegarden. Other vocals included Masvidal’s processed robotic voice, and guest Sonia Otey offering a spoken mantra for “Sentiment.” New bassist Sean Malone—a music teacher and author of bass theory books—was a clean-cut outsider, even among outsiders. His jumpy, active explorations on the bass added to the liquid movement of the material.

Instrumentation on Focus was more varied than on the Cynic demo tapes, including guitar synths, electronic drums, keyboards, and the Chapman Stick—a ten-stringed oddity designed to be played solely via two-handed tapping. Masvidal’s growing interest in yoga, meditation, philosophy, and spirituality inspired the lyrics, an alternative to the gore and violence embedded in the music of the band’s Florida peers. Cynic’s message was more hopeful than the scathing political/social critiques of Atheist, or the vitriolic accusations in Chuck Schuldiner’s lyrics for Death. Put simply, Focus didn’t fit anywhere. The album was highly criticized at the time of its release in June 1993, flatly dismissed by death metal diehards who had a tough time with its colorful approach. Focus was so progressive that it nearly shot Cynic out of the metal genre the band had grown up in.

Focus was misunderstood before it was even released. Producer Scott Burns had worked on Cynic’s demos and countless albums by other death metal bands, yet Masvidal recalls how the producer couldn’t connect with Focus. “He did not understand what we were doing,” says Masvidal. “Scott isn’t a musician—he’s a scientist, a computer guy—and he didn’t really understand where we were coming from. There was so much tension and discomfort in the studio. Scott was saying, ‘Wait till [Roadrunner Records’] Monte Conner hears this, he’s gonna freak out! And now there’s this computer vocal!’ We had to go with our gut instincts and believe in what we were doing.”

Touring to promote Focus was bound to be a trip down a thorny trail, considering the album’s highly unorthodox nature. Canvassing Europe with death-turned tech band Pestilence proved to be a highlight—though the gigs were hampered by the cold reception Pestilence received for their own progressive departure, Spheres. A totally mismatched U.S. tour with Cannibal Corpse and Dutch death metal purists Sinister did nothing to place Cynic in front of the proper crowd. Being heckled by shouts of “You suck!” night after night was a deflating experience for Cynic’s peaceable, sensitive members. For many Cannibal fans, the sight of headless Steinberger guitars, a growling female vocalist playing keyboards, and deeply tranced-out musicians playing in shut-eyed serenity was just too much.

“We didn’t get a lot of love on that tour,” Masvidal remembers. “Not being mean, but it’s meatheaded. It’s that kind of primal fan that doesn’t want to think too much. We love the guys in Cannibal Corpse and they were cool, but their music is so visceral and more about something else.”

…A funny thing happened… Cynic’s Focus continued attract new fans each year. In fact, few metal bands besides Cynic have amassed such a rabid cult following with just one album. Momentum continued building behind Cynic during the first decade of the 2000s. Roadrunner Records saw the interest and satisfied demand by reissuing Focus in 2004.

On the continued interest in and the impact of Focus, Masvidal admits, “I’m completely floored. It’s a testimony to trusting your instinct and going against all odds.”

Congratulations to Paul Masvidal and Sein Reinert of Cynic on the 20th anniversary of their enduring masterpiece. For more tales from the anarchic and cerebral world of progressive heavy metal, pick up a signed copy of Jeff Wagner’s masterful Mean Deviation: Four Decades of Progressive Heavy Metal today.