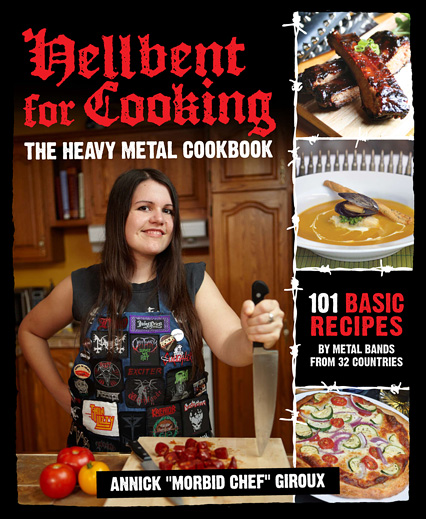 “Death to false meals” is the battle cry this Thanksgiving week, as host Ian Christe (“Sound of the Beast”) welcomes guest Annick Giroux, author of the classic book HELLBENT FOR COOKING: The Heavy Metal Cookbook. A dedicated headbanger, Annick will explain how she collected over 100 favorite recipes from metal bands from 32 countries, including Thin Lizzy and Sepultura. Tracks by some of her chefs, including Nuclear Assault, Obituary, Amebix, Midnight, S.O.D., and more. Feast like metal royalty, and know your Roots!

SIR LORD BALTIMORE – “Kingdom Come” from KINGDOM COME
AMEBIX – “Axeman” from ARISE!
AFTER THE BOMBS – “This Hell” from RELENTLESS ONSLAUGHT
S.O.D. – “Milk” from SPEAK ENGLISH OR DIE
AUTOPSY – “Charred Remains” from SEVERED SURVIVAL
OBITUARY – “Chopped in Half” from CAUSE OF DEATH
REPULSION – “Bodily Dismemberment” from HORRIFIED
BLASPHEMY – “Blasphemous Attack” from GODS OF WAR
SADISTIK EXECUTION – “Agonizing the Dead” from THE MAGUS
MANTAK – “Hellfernal Blasphemies” from 666
FUNEROT – “The Man With the Megaton Mind” from INVASION FROM THE DEATH DIMENSION
TANKARD – “Feed the Lohocla” from THE MORNING AFTER
NUCLEAR ASSAULT – “Hang the Pope” from LIVE SUFFER DIE DEMO
MIDNIGHT – “White Hot Fire” from TOTAL AND COMPLETE FUCKING MIDNIGHT