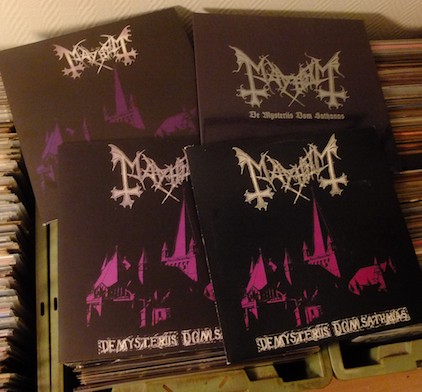 Twenty years after the release of Mayhem’s debut album—the long-labored De Mysteriis Dom Sathanas—the music, the band, the myth, the aura, and the intrigue still persevere. We are about to release the red edition hardcover reissue of SLAYER MAG X, featuring interviews from 1992-1994 with Mayhem, Burzum, Emperor, Darkthrone, Bathory, and many others, which will add plenty of fuel to the fire.

To further mark the 20th anniversary, here is a full translation from Norwegian of the band’s first feature article in any metal magazine anywhere. Lifted from our book METALION: The Slayer Mag Diaries, these are the humble beginnings as originally printed in Slayer Mag 3/4 in 1986. Shortly afterward, Mayhem released Deathcrush, dedicated to Slayer Mag editor Jon “Metalion” Kristiansen, written in the hand of Euronymous: “This mini-LP is dedicated to METALION and the mighty Slayer Mag. May he live for a LONG time, that man.”

Notorious events in Oslo in 1993 turned Mayhem into a household name in metal circles. As usual, we have the deep, early perspective on the exploits of this uniquely evil metal force.

Above: The original four-page article from Slayer double issue 3/4, lifted from METALION: The Slayer Mag Diaries

“I gaze into the glassy eye of your fearsome Jehovah and pluck him by the beard; I uplift a broad-axe, and split open his worm-eaten skull.”

Somewhere in Norway there is a barn. In this barn there is a pigsty. And in this pigsty MAYHEM has their rehearsal space. And what is MAYHEM? Well, it is something as rare as a TOTAL DEATH METAL group! AAARRRGGGHHHH! That such a raw and good band exists in Norway is totally incredible! Did you think SODOM was fast? Bah, that’s nothing compared to MAYHEM. Because these black souls play fast, fast, F A S T !!!!!! Holy shit, they are good! (Oh yezz!) So who are the people who started this incredibly raw TOTAL DEATH group?

Yeah, they even include Messiah! (It took 2000 years for him to return, but when he did, he did it with a bang!)
The Norwegian Quorthon? Necro has a style of his own. He plays his bass through the fuzz and it sounds incredibly heavy! Destructor is one of the fastest guitar players I’ve heard in a loooooong time. And let’s not forget about “Morbid,” who keeps on drumming away like he’s possessed.

If you want to describe their style (and you do), you can say that they play VENOM’s ‘Black Metal’ on 78! (Without exaggerating!) MAYHEM is one of the absolutely fastest and rawest bands I have ever heard! PURE FUCKING MAYHEM! They will play in Ski – Folkets. BE THERE OR BE DEAD! For that show they have bought 40kg of “effects” at the butcher! (FUN, FUN, FUN!!!!!) They also promise some pyrotechnics (FUN, FUN, FUN!!!!!). TOTAL MAYHEMIC DESTRUCTION. MAYHEM TO THE FUCKING DEATH!!

As far as we know, MAYHEM is the ultimate THRASH METAL band in Norway. (We also have AGRESSOR, but they certainly aren’t as raw.) And I don’t think we can call ARTCH THRASH METAL…….. (Although they are really fucking good…..)

As long as there is life in us we will write about M A Y H E M here in Slayer. I also need to mention that vocalist Messiah also plays in another band from Asker called BLACK SPITE. (That we might return to in Slayer 5) Their sound is like that of MAIDEN & PRIEST but a bit rawer!

IF YOU’RE GONNA DIE, DIE THE NORWEGIAN WAY WITH MAYHEM