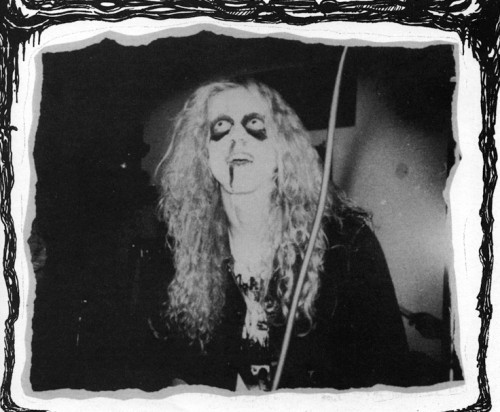 Yesterday we hailed the 20th anniversary of Mayhem’s De Mysteriis Dom Sathanas, the first masterpiece of Norwegian black metal, by translating a Slayer Mag 3/4 article that was Mayhem’s first-ever feature in a metal magazine.

Here’s something even more precious—the voice of Per Yngve “Dead” Ohlin.

In a few days, we will release our hardcover reprint of Slayer Mag X, the crucial tenth issue of Norway’s Slayer Mag zine. This legendary edition is jammed with hundreds of revelations about the inner workings of the black metal scene in Norway around 1992 through 1994. Rivalries, arrests, violence, and arsons are discussed candidly. Most importantly, so is the heart of black metal itself.

In light of the De Mysteriis Dom Sathanas anniversary, we present part of Morgan “Evil” Håkansson of Marduk’s interview with Dead from Slayer X about writing lyrics for the key songs. Naturally, Dead does not perform on the album. He tragically committed suicide in 1991, after devoting his life and soul to the creation of the record. His life and persona are now legend. Here is the unvarnished reality of the creative process of someone whose thoughts remain largely a mystery.

METALION: Tell me something about your lyrics…what do the contents explain?

DEAD: “So far, I’ve written the lyrics to all the [Mayhem] songs after Deathcrush: ‘Funeral Fog,’ ‘Freezing Moon,’ ‘Buried by Time and Dust,” and “Pagan Fears.” Mostly they deal with how I feel when I wrote them. It’s hard to explain, and they are very different, too. I can explain “Funeral Fog,” it’s about a legendary place in the middle [of] the Carpathian horse shoe. A swampland called Shurlock Basin, which is surrounded by fearful superstition, and the weirdest beings are thought to haunt the place. That I thought about when I wrote that song and I started to imagine heavy fog lit up by the full moon. This fog oozed up from the place. Drifting woefully in silence to extinguish the lives of the local people. And bring their souls to Lord Satan.

“Pagan Fears” is the newest song made by us, and it’s a bit strange. It reminds me of “Chainsaw Gutsfuck” but it is not as brutal. Anyway, the lyrics talk of some people living in an ancient and barbaric society (Fucking Hell how I hate the word “society,” when it is used as a topic in lyrics, but of course I don’t mention that word in “Pagan Fears”!), and the idea that the past isn’t dying, but remains in some faded reality, and that they’ll not die out, but remain in the past which is actually not dying, to haunt people in the future, pop up in their minds. The time itself exists and is eternal, so is it vanishing? They realize they remain forever. That was a strange idea I’ve walked around with till I had to write it down.

We don’t have any concept in particular in the lyrics and not only I am writing them. Before it was mainly Necro Butcher who wrote most of the stuff, and he has explained to me what it was like. He was almost asleep, then he suddenly thought of a song title. He had to write it down quickly. And after some minutes it happened again and again. The day after, he tried to read what he had written down that night, and he found out he couldn’t read the handwriting—he had written in no light, and the pen had been fucked up. But some lines were readable and they became “Deathcrush”.

The most difficult one so far is the one that will be the title track on De Mysteriis Dom Sathanas. The lyrics are about an extraordinary Evil Coven that are the book. But I must change a lot of the lyric. That song was nearly complete once, but we found out we weren’t satisfied with the music, so we dropped all the music. Then I found out that the lyrics weren’t evil enough, and it didn’t describe the enormous force enough. Anyway, we will involve our self very much in this particular song.”