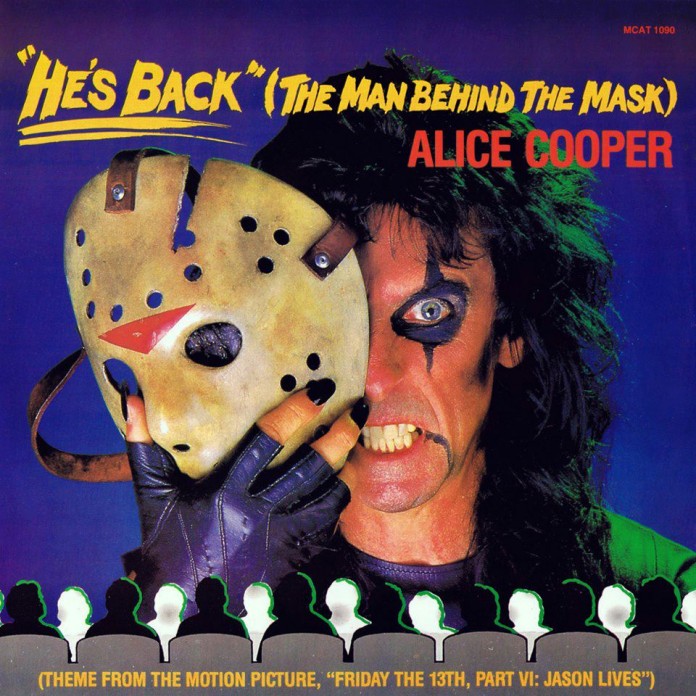 Beyond the 666+ reviews now blowing the minds of Entertainment Weekly and everybody else, Bazillion Points’ monumental new 568pp book HEAVY METAL MOVIES: Guitar Barbarians, Mutant Bimbos & Cult Zombies Amok in the 666 Most Ear- and Eye-Ripping Big-Scream Films Ever!, by Mike “McBeardo” McPadden, features a lengthy sitdown with Alice Cooper, star of stage and scream.

Blessing the book with an exclusive and candid interview, shock rock legend Cooper debriefs readers on his contributions to John Carpenter’s Prince of Darkness, Wayne’s World, Friday the 13th: Part VI, The Decline of Western Civilization Part II: The Metal Years, and many others. Of course, the book also reviews several Cooper films, including Welcome to My Nightmare, heralding the theatrical stage shows that inspired a generation of musicians and filmmakers alike to crank up the sex and violence to eleven.

Here are a few drops that spilleth over from Alice’s bucket of blood:

On WAYNE’S WORLD (1992): “That little movie didn’t cost anything to make, yet it actually made more money than Batman! As a result, I’ve been stuck with that ‘I’m not worthy’ thing ever since.”

On being chased around the set of SEXTETTE (1978), by co-star Mae West: “At the end of our song, the moment that the director yelled ‘Cut!’, Mae literally leaned over and said, ‘Why don’t you come back to my trailer?’ It was great to have an eighty-six-year-old woman coming on to you…”

On MONSTER DOG (1986): “That’s exactly the kind of movie I rent. It’s exactly crappy enough and stupid enough for me to really like it. If I were to have rented this movie, I would have been very happy. It was fun. There was so much blood in this movie that the film crew was wearing raincoats.”

On SGT PEPPER’S LONELY HEARTS CLUB BAND (1978): On paper, this movie sounded like a great idea—now it’s considered one of the great turkeys of all time. Aerosmith was in it, and Steve Martin was in it, and the Bee Gees, who were all well respected. Then Peter Frampton was a friend of mine. Everybody involved in this movie was friends with each other. Halfway through the production, though, the producers realized that most of the actors couldn’t deliver dialogue…”

On PRINCE OF DARKNESS (1987): “I actually just showed up to watch John Carpenter shoot the movie. John said, ‘Hey Alice you know what would be great? If you put on a stocking cap and were just standing in the middle of all these zombies.’ The idea was that the camera would just pan across the scene, and it would be funny if someone watching the movie thought for half a minute, ‘Hey, wait! That was Alice Cooper!’…The next thing you know, I’m the main villain in this movie, and I’d never even seen the script!”

For the full 568 pages of horror and hilarity, visit: www.heavymetalmovies.com