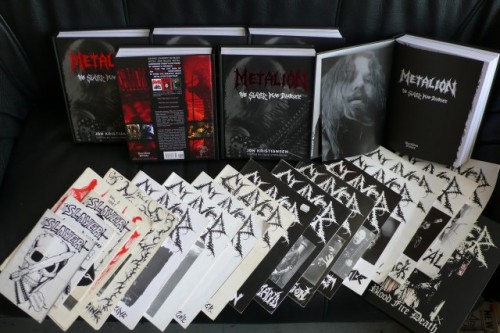 Oslo librarian Terje Haugsgjerd writes: “Which is the heaviest book published in Norway the past few years? No, it’s not [Karl Ove] Knausgård’s My Struggle even if the title would be a fitting one for this book too. The book in question is Metalion: The Slayer Mag Diaries. The period is depicted from the point-of-view of the author and paints a personal, but certainly non romanticizing, picture of an astonishingly creative period in Norwegian metal, a period that was also dangerous and controversial with its murders, suicides and church burnings.”

“In short, this is, for me, a unique Norwegian book, both physically with all its kilos, but especially for its content. In one hundred years, this will be a book about what once was.”

Comments Jon Kristiansen: “From the start, I made Slayer Mag as honestly and as well as I could. I never knew any other way. I hope that I have produced something that will stand the test of time.”

In 744 pages, METALION unravels thirty years of underground metal history, centered on the unique Norwegian black metal music scene of which author Kristiansen was a central figure. The book includes reproduction pages from every issue of the Slayer Mag metal fanzine, spanning from the early 1980s through 2010. In addition, Kristiansen recounts his personal experiences in tumultuous “diary” sections.

Read the whole declaration by the Oslo Public Library here [in Norwegian]: http://blogg.deichman.no/musikk/2014/07/21/metalion-the-slayer-mag-diaries/

Bazillion Points Books also recently reissued a limited 20th anniversary edition of the crucial tenth issue of Slayer Mag, the legendary SLAYER X. Originally published by Jon Kristiansen in Sarpsborg, Norway, the densely written and decorated 86-page magazine contains an myriad of interviews with key characters from the Norwegian uprising, all conducted during the turbulent 1992 to 1994 years, including Mayhem, Burzum, Darkthrone, Thorns, Emperor, Satyricon, Bathory, Dissection, Enslaved, and many others.