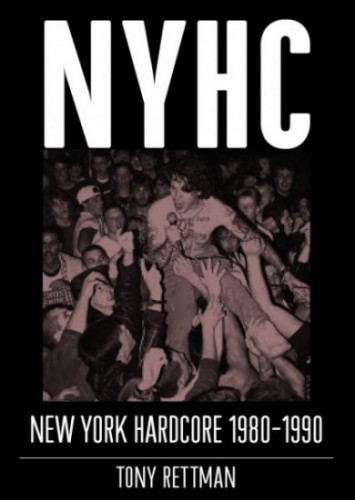 In his foreword, Cricien—who has led Madball since the age of thirteen, for twenty-five years, and first made his stage debut with Agnostic Front at age seven—describes the transformation of his brother Roger Miret into hardcore punk and pillar of the Lower East Side hardcore scene during the 1980s.

Writes Cricien: “These years were formative ones. For those that lived it, you will be transported back in time and you can revel in the nostalgia. To those that didn’t live it, go ahead and transport yourself to that period and be grateful that you’ve discovered this special scene. Read on and take everything in—but don’t feel like you missed out! This book is a way to get caught up on history, and also a bridge to a whole world that is as relevant today as its ever been.”

NYHC will be available wherever books are sold in November 2014.

Tony Rettman’s ambitious oral history captures ten years of struggle, including the scene’s regional rivalries with D.C. and Boston, the birth of moshing, the clash and coming to terms of hardcore and heavy metal, the straightedge movement, and the unlikely influence of Krishna consciousness.

Tony Rettman is a freelance music journalist whose work has appeared in the Village Voice, Vice, The Wire, Philadelphia Weekly, Cleveland Scene, Arthur, Swindle, Signal to Noise, Mean, and Thrasher. At age 14 in the 1980s, he was the coeditor of Common Sense zine. He has provided liner notes for such artists as Hackamore Brick, Bored Youth, Beyond and many more. He is a contributing editor to DoubleCrossXX.com. In 2010, Revelation Records released his acclaimed first book, Why Be Something That You’re Not: Detroit Hardcore 1979-1985.