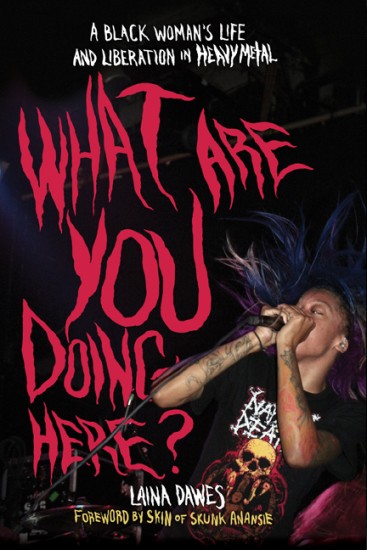 Greenlight Bookstore and Bazillion Points Books present renowned music journalist Laina Dawes signing her landmark, thought-provoking debut What Are You Doing Here?: A Black Woman’s Life and Liberation in Heavy Metal (ISBN 978-1935950059) at the Afropunk Fest 2014 in Commodore Barry Park, Brooklyn, at 4PM ET on Saturday, August 23. The signing is part of the Greenlight pop-up book fair, which will also feature signings and Q&As with Bryant Terry, author of Afro-Vegan, MK Asante, author of Buck: A Memoir, and Nelson George, author of Hippest Trip in America: Soul Train and the Evolution of Culture & Style.

Featuring a foreword by Skin of Skunk Anansie, What Are You Doing Here?: A Black Woman’s Life and Liberation in Heavy Metal, is available now wherever books are sold, and in eBook form via all prominent ebook platforms.

Dubbed “the most multicultural festival in the US” by the New York Times, the Afropunk Fest 2014 takes place August 23 and 24 at Brooklyn’s Commodore Barry Park. Heavy headliners include Bad Brains, Body Count, Fishbone, Straight Line Stitch, Tamar-kali, teen metal sensations Unlocking the Truth, Cro-Mags, and many others.