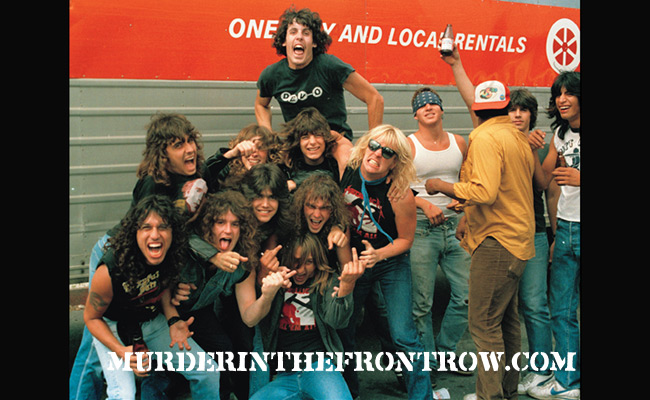 Harald Oimoen and Brian Lew packed a lot of power in their massive thrash metal photo book MURDER IN THE FRONT ROW: Shots From the Bay Area Thrash Metal Epicenter. One of the most mind-blowing events pictured took place thirty years ago this month, and both denim-bedecked photographers were there. Part of Eastern Front’s four-day outdoor festival at Aquatic Park in Berkeley, “Day in the Dirt”—the “Woodstock of thrash metal”—took place on August 19, 1984, and featured a lineup that included Exodus, Slayer, Suicidal Tendencies, Blue Cheer, and a handful of other heavy hitters.

Says Brian Lew: “When MURDER came out I was surprised by the outpouring of nostalgia from people about Day in the Dirt. In hindsight it really was the ‘Woodstock moment’ for the original Bay Area Metal scene. I didn’t realize that until I saw how other people reacted to our old photos of the day. My memories are more about the vibe and how it was basically just a bunch of kids hanging out in a park watching bands, some of whom were also friends. At one point I remember sitting in the back of a U-Haul truck (aka the ‘backstage dressing room’) with some band guys, just hanging out, wondering why ‘that old band’ Blue Cheer was playing. It really did have a backyard BBQ feeling and looking at the old photos now reminds me how the vast majority of us were so young, almost all under 21.”

Los Angeles outcasts Slayer and Bay Area heroes Exodus became blood brothers that day, and thrash metal coalesced into the juggernaut that rose to consume metal in the 1980s. No makeup, no barriers, just raw energy and fearlessness. Tom Araya was part of the party, and he recalls: “We were all trying to do a group photo, and then Toby Rage pulled off an ’80s photo bomb, literally! I remember during our stage set seeing a beer bottle hitting Jeff [Hanneman] square in the chest. As the evening grew darker, truck headlights subbed for spotlights. It was definitely a great day in the park!”

About that Toby Rage photo bomb… Doug Goodman, immortalized in the book at the top of an impromptu pileup consisting of members of Slayer, Exodus, Possessed, and Suicidal Tendencies, recalls: “It felt more like a backyard BBQ with a bunch of friends than a concert. The funny thing is that while the Harold shot that includes me in my Devo shirt probably does qualify as being ‘iconic’ at least in the metal world, I don’t really remember it being taken. It was just another group of friends jumping on each other in front of a camera, isn’t that what everybody did back in those days? I’ve always enjoyed how happy we all look.”

The full dogpile sequence shows Goodman being elbowed down to the ground by the late Bay Area stage-diving legend Toby Rage.

Tom Araya’s brother Johnny (later of Bloodcum) came up with Slayer from Los Angeles and was part of the scramble. Says Johnny: “That day was total chaos. It was like one of those backyard keg parties. People were everywhere, dust was everywhere. I remember meeting Suicidal Tendencies for the first time, and thinking, ‘These dudes ain’t metal!’ Then I was blown away watching their set. They played after dark, and had to use headlights for stage lights, that was the icing in the cake! When Toby Rage walked on a sea of heads like Jesus walking on water, we were all amazed. I was 15 years old.”

Doug Goodman adds: “It wouldn’t bother me to get an elbow in the face from Toby again, at least it would mean that he was still with us. I like the shot in MURDER where you can see Toby and myself standing in the background on stage left. That photo would have been taken after the pile up ones, and shows that an innocent elbow was all in good fun.”

Goodman’s little brother Tom performed his first stage dive at Day in the Dirt: “I was 14-years-old, 4-feet-nothing and about 80 pounds, going to a metal show with my big brother and his friends. I remember wearing my denim vest, filled with patches my brother had given me. Tom Araya would do the figure-eight head bang while playing the bass and I thought that was the greatest thing ever! I tried the figure-eight myself for a bit but got dizzy. I think it was during Slayer that I worked up enough nerve to get up on stage. I was so small that when I entered the pit I was underneath everyone’s elbows. I figured I could dive like the big guys, but I took off from the stage feeling nothing but fear. This guy Big Wayne mercifully caught me, completing my first stage dive.

For many more shots from Day in the Dirt, part of 400 overall shots capturing the birth and rise of San Francisco Bay Area thrash metal explosion, visit the official book page: