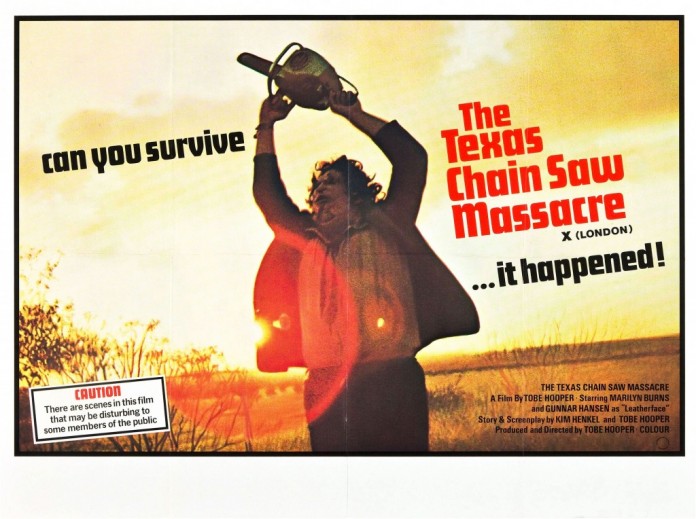 The Texas Chain Saw Massacre is a BIG one. Tobe Hooper’s original unrelenting, taboo-busting masterpiece premiered exactly forty years ago today, on October 1, 1974. Rooted in pitch-black passions and brutally transformative, Chain Saw may well be the ultimate in heavy metal horror. In this excerpt from Heavy Metal Movies, McPadden explains why.

Only two films in my experience tap into “prehuman” intensities of fear. The first is Night of the Living Dead (1968) and the other is the original Texas Chain Saw Massacre. Both were directorial debuts, made on the fly by amateurs, and both exploded across global consciousness like nuke-backed napalm. Viewer by viewer, Night and Massacre leveled previous conceptions of the ability of art to terrify an audience. These milestones ran nonstop for more than a decade each in neighborhood theaters, drive-ins and art houses and at midnight screenings before reaching untold new numbers on home video. All who witnessed them sustained unprecedented psychological and emotional damage.

Night and Massacre expelled crowds back out into the living world cathartically cleansed and inwardly shattered. Having survived, viewers were newly equipped to confront the real horrors of life, large and small, with imaginations savagely torn open. In comparative terms, one often hears about the line-in-the-sand experiences of a metal fan discovering heavy music: “I heard [Sabbath/ Priest/Slayer/Pantera/Carcass] and that was it. I changed and I could never go back.” Night melds ’50s EC horror comics with gothic graveyardspookery and apocalyptic dread, punctuated by a surreal coda. The Texas Chain Saw Massacre, however, incorporates those all those elements, but it also anticipates and lays out multiple forms of psychotic blood-splattered carnage.

Five teens pilot a van through the desert roads of the Lone Star State. They’re college-age, longhaired, bell-bottomed stoner types, hugely typical of the time, with the exception of fat, nasty, wheelchair-bound Franklin (Paul A. Partain). Already, the metal spirit is evident in the rockand roll youth atmosphere and the violation of a taboo: we hate the handicapped guy. As you’d expect, the kids pull over for a hitchhiker (Edwin Neal). Their new passenger’s grimy appearance and spastic vocal mannerisms evoke Charles Manson. First it’s uncomfortable, and then it’s appalling. The Hitchhiker produces a straight razor, slashes his own hand, and then turns the blade on Franklin. The kids kick him out onto the blacktop. Then the freak-out starts.

The longhairs stop at a gas station, where the Old Man (Jim Siedow) in charge says he’s waiting for a fuel delivery to fill his pumps. The kids decide to stay. Some look for a swimming hole. Kirk (William Vail) and Pam (Teri McMinn) approach a farmhouse to use a phone. They step inside and knock on a giant steel door, which slams open. There’s Leatherface. This behemoth slob in a bloody butcher smock and a mask made of human skin slams in Kirk’s skull instantly with a sledgehammer. The young jock collapses and spasms uncontrollably. Pam stares in deadeyed horror. Leatherface pounds Kirk’s head repeatedly until the shaking stops. He then drags the body into the other room, glares at Pam, and slams the massive door shut. Silence follows.

Viewers are right there with Pam—frozen, choked, and reeling with fear. The introduction of Leatherface immediately establishes the type of antihero that would become the crucial figure in horror and heavy metal. His appearance recalls Alice Cooper explaining that he was tired of hearing about “rock and roll heroes” and thus created himself as the first “rock and roll villain.” Leatherface is the embodiment of all things frightening and repulsive, as well as everything that’s appealing about what’s frightening and repulsive. In large part, that’s about power. He looks like a monster, and, noticeably, he’s decked out in skins. Rock and roll villains—from Gene Simmons to GG Allin to Marilyn Manson to corpse-painted hordes the world over—have been following his lead ever since.

Attempting to flee, Pam sees that the farmhouse is inundated with thousands upon thousands of human bones, and skin, too, and meat. Most remains are piled in nauseating heaps, but some are fashioned into grotesque furniture, like a homicidal caveman’s take on an H. R. Giger (Alien) design. A live chicken clucks maniacally in a cramped, suspended cage. Like Sally, the bird is trapped. We are too. The sight of the Chain Saw living room is as disturbing as movies get. There is terrible logic to the arrangement of bones and splattered organs. The sheer volume reveals that countless humans have been slaughtered here, and that it’s been going on for years and years and years and years.

Pam turns to run from the house, but Leatherface grabs her and carries her off, wailing and flailing, to his kill room. Horribly, he impales Pam alive on a meat hook. Here, we witness the birth of an entire new level of horror—a quickening and increasing of the heaviness, as Pam squeals and reels on that hook. Chain Saw then chronicles the pursuit and extermination of the young travelers. The film is gritty, merciless, and shot almost documentary style, with bare-bones barbarism. Eventually, only Sally (Marilyn Burns) survives. There is a dreadful moment when she reaches the Old Man at the gas station for help, feels a glimmer of relief, and then realizes that he, too, is part of the cannibal clan.

Back at the house, Chain Saw climaxes with the motherfucker of all death metal milieus. The Hitchhiker, the Old Man, and Leatherface—who’s now dressed as the mom of the bunch—tie Sally to a chair at their family table to serve her dinner. Director Hooper achieves a Hitchcock-level triumph of suspense he cuts from the tormentors to the ghastly menu items to searing close-ups of Sally’s frantic darting eyeballs as she takes in the horror. Enter Grandpa (John Dugan). This cadaverous, barely breathing ancient will kill their dinner guest. Sally’s head is held over a bucket as Grandpa hits her with a hammer—but his blow is too soft, and he drops the tool. And so, over and over again, Grandpa slams Sally’s head and drops the hammer. She screams and bleeds and the assembled psychos laugh and cheer, and Grandpa gives it another go. And then another. The movie theater has never heard so much screaming, as this process is excruciatingly hard to watch. With some distance, this scene is the height of Chain Saw’s black comedy. Grandpa forces the death metal ingredients to their brutal limit—and then he keeps going.

Sally manages to break free and jumps through an upstairs glass window. A final dance of doom ensues. Leatherface and the Hitchhiker pursue their prey onto a highway. An eighteen-wheeler trucker flattens the Hitchhiker spectacularly. Leatherface slices his own leg in the melee, and Sally manages to hop in the back of passing pickup. She laughs like a lunatic, her mind snapped, as Leatherface swings his chainsaw by the roadside, dancing and squealing while the sun rises behind him.

Jarringly, it’s over. After the dawn, there is only more darkness. Deeper and bleaker. Hurling ever downward into forever. If a more heavy metal experience is to exist in the annals of horror films, you, reader, are going to have to make it. Look for inspiration to “Texas Chainsaw Massacre” and “Leatherface” songs by Blood, Last House on the Left, Burnt Offering, Lääz Rockit, Legion of Death, Revenge, Skitzo, and other miscreants.

There’s something to chew on! One of the meaty 666+ reviews—including multiple Texas Chain Saw sequels—in this essential book.