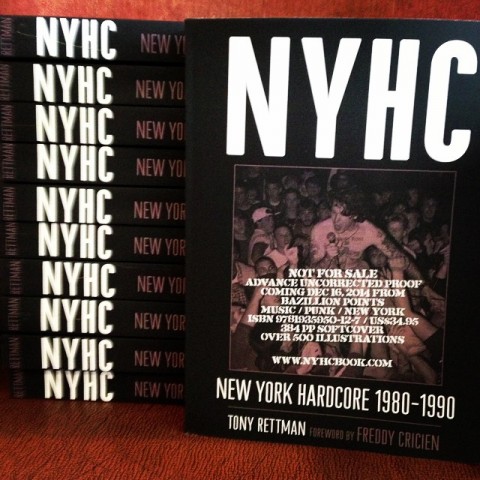 Based on original interviews with over 100 key historical figures, the dense 384pp volume features hundreds of images and over fifty chapters covering the bands, venues, labels, hangouts, and larger-than-life characters that built hardcore punk rock in New York City. Bazillion Points Books is now accepting preorders, which will ship with a limited Sean Taggart flyer patch and metal badge in early December.

Previews and a sample chapter (“17. East Village Nights: A7 and 2+2”) are available at this location:

Roger Miret of Agnostic Front: “I’m floored! Tony Rettman’s NYHC is by far one of the most informative looks at New York hardcore. An amazing read loaded with remnants of my life and a movement I truly adore. Hardcore lives!”

Mike Judge of Judge: “Thank you, Tony Rettman! Great book! So much fun to read everybody’s take on our great history. So proud to be a part. Much respect!”

Freddy Cricien of Madball: “This book is a way to get caught up on history, and also a bridge to a whole world that is as relevant today as its ever been. This book is a fun and informative read—enjoy it!”