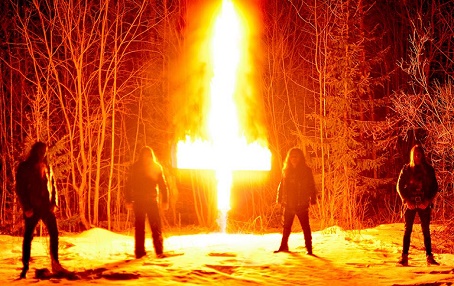 Old-school black metal resurrection alert! Arriving hot on the heels of Bathory, Third Storm was one of Sweden’s first black metal bands. Fueled by Hellhammer and Sodom, they raised hell all over the Uppsala lands during the years 1986 to 1988 before calling it quits. Not even metal-crazed Sweden could handle Third Storm’s next-level evil and brutality on demos such as “Mad Man” and “Smell of Vomit in the Torture Hall.”

In what seemed like the blink of an eye, 2014 arrived and Third Storm was reborn from the dark forest. The core members Jimmy Eriksson and Heval Bozarslan (ex-Sarcasm) promptly recruited SWEDISH DEATH METAL author Daniel Ekeroth on bass. Half-buried in old school ’80s worship, the band has risen from its grave ready to advance a genre they helped to invent. Enjoy these eerie minutes of blazing black metal and ultra-heavy funeral doom, as the band releases its creepy forest phantoms and monstrous burning cross. No CGI technology used at all in this video, just pure Uppsala wickedness and ancient scorn.

New EP “Tarîtîya Me” due any day now from Dark Descent Records.