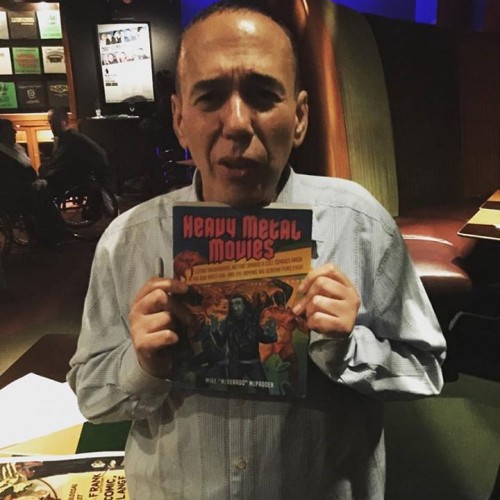 What kind of &@#$ reads HEAVY METAL MOVIES:Guitar Barbarians, Mutant Bimbos & Cult Zombies Amok in the 666 Most Ear- and Eye-Ripping Big-Scream Films Ever! by Mike “McBeardo” McPadden? GILBERT GOTTFRIED, that’s &@#$in’ who!

The filthy, filthy man has been pouring out his movie-loving soul for the past two years through Gilbert Gottfried’s Amazing Colossal Podcast, ushering a riotous parade of Hollywood greats and B-movie heroes into great, candid interviews about the studio system, ’70s cinematic rebellion, comedy, and of course barbarians, aliens, karate chops, and violence.

And here’s Gottfried, apparently caught in the act of selling his dog-eared copy of HEAVY METAL MOVIES to Meredith Vieira from NBC News, Today, and The View. Though for sure he first refused, Vieira must have really turned the screws and made Gilbert an offer he couldn’t pass. Here he looks to be fishing in his pocket for her change…but she eventually gave up waiting, grabbed the book, and said, “pay me next time, you owe me a nickel, Gottfried.”

Read the book, hear the podcast!