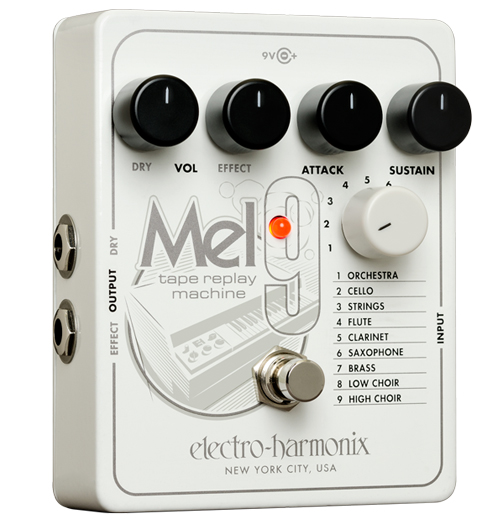 Always surprising and inspiring effects peddlers Electro-Harmonix have just announced the release of the M9 Tape Replay Machine effects pedal, “a dedicated Mellotron-inspired pedal, reproducing all the classic Mellotron sounds such as cello, orquestra, strings, and, of course, flutes, besides many other classic sounds.”

The company has dabbled in this sound before by including a Mellotron flute effect on their earlier C9 Organ Machine pedal, but this is a different beast altogether. Now, through techromancy and some kind of dark arts, the company promises to bring the magical, enchanting sound of the Mellotron into this little white box; notably via circuitry, not by using prerecorded samples.

For more info, check out our Mellodrama DVD/soundtrack package, exploring the rising and falling fortunes of the Chamberlin and its better-known successor the Mellotron—the first musical keyboards to play the pre-recorded sounds of other instruments.