On the eve of the Decibel Tour 2016 launch, headliner Abbath iced the U.S. highways by releasing his slick new video for “Winterbane,” a blizzard of wolves, goblins, and corpse paint. See above! While this crazy cabal —joined by grizzled High on Fire, upstarts Tribulation, and fist-banging maniacs Skeletonwitch— winds its way across the country, we will be waiting at Union Transfer in Philadelphia on April 15 with open arms and open kegs.

As previously posted, the final night of the Decibel Tour will kick off a brain-bending weekend of heaviness in Philly. Saturday, April 16 brings the five-dollar Grimposium fiesta, an afternoon of heady delights including a screening of the Death documentary Death by Metal, plus a panel featuring death metal painter Dan Seagrave (Entombed, Morbid Angel), Decibel editor/Choosing Death author Albert Mudrian; and Bazillion Points publisher Ian Christe. 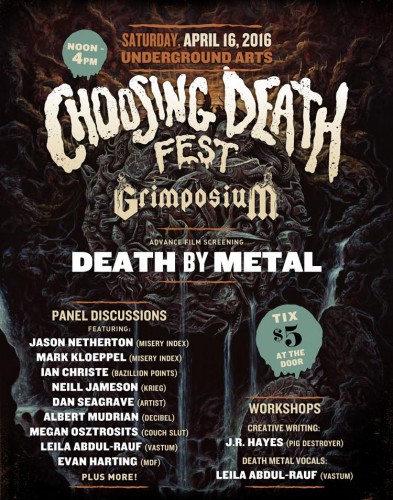 Then the evening of April 16 leads us to Choosing Death Fest, cosponsored by Grimposium, featuring Dying Fetus, Nails, Misery Index, Deceased, Noisem, Horrendous, Magrudergrind, and Taphos Nomos. Total devastation is a must!

So catch this barrel train of madmen when you can. Last stop, Philadelphia!