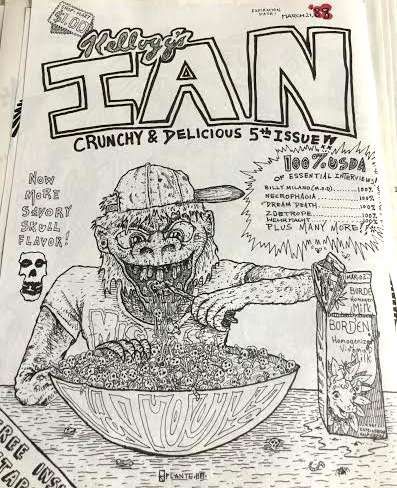 Today is Presidential Primary Election Day in New York State, so here are a choice few words about the loudest mouth on the campaign trail, Donald Trump, coming from one of the loudest mouths in NYHC, Billy Milano. The catch is that this conversation happened almost thirty years ago!

A couple decades before the launch of Bazillion Points, our publisher Ian Christe was already busy with printed matter via his IAN fanzine. In late 1987, just after the release of M.O.D.’s U.S.A. for M.O.D., he caught up with S.O.D./M.O.D. singer Billy Milano, then on the road with Exodus on their Pleasures of the Flesh tour.

As often happens in the worlds of punk rock and heavy metal, Milano had a few wild ideas that seemed provocative but just took the world a lot of years to embrace. Asked about the 1988 Presidential Election, Milano pointed a stout finger at Donald Trump. The “short-fingered vulgarian” Trump already had a steady tabloid platform inside New York City in the 1980s, based on comically extreme outbursts and insult humor. Even today, his political views could have been plucked directly from S.O.D.’s classic Speak English or Die album. 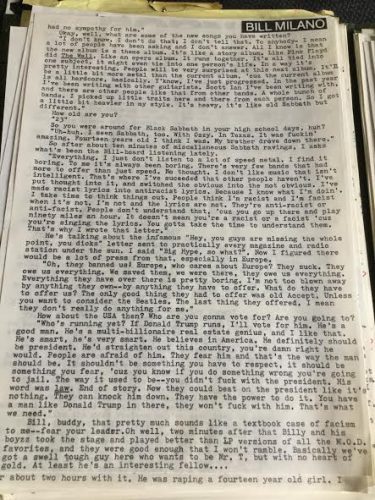 IAN: “How about the USA? Who are you gonna vote for? Are you going to?”

Billy Milano: “Who’s running yet? If Donald Trump runs, I’ll vote for him. He’s a good man. He’s a multi-billionaire real estate genius, and I like that. He’s smart, he’s very smart. He believes in America. He definitely should be president. He’d straighten out this country, you’re damn right he would. People are afraid of him. They fear him and that’s the way the man should be. It shouldn’t be something you have to respect, it should be something you fear, ‘cuz you know if you do something wrong you’re going to jail. The way it used to be—you didn’t fuck with the president. His word was the law. End of story. Now they could beat on the president like it’s nothing. They can knock him down. They have the power to do it. You have a man like Donald Trump in there, they won’t fuck with him. That’s what we need.”

Cover art for IAN #5 by the almighty Robert Plante. He is currently working on DEMO-LITION, a project of mammoth astounding proportions, for Bazillion Points.