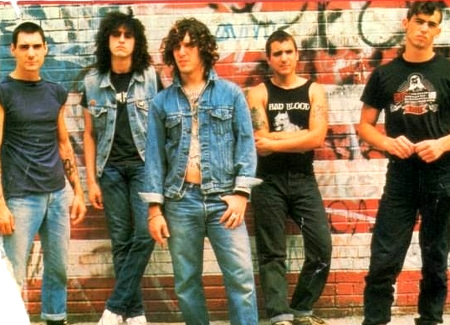 In the aftermath of New York’s 1970s punk scene came a wilder, tougher breed of 1980s hardcore punk in the city. Spearheaded by D.C. transplants Bad Brains, centered around Manhattan’s crumbling Lower East Side, and more influenced by heavy metal than earlier hardcore scenes in L.A. and the Midwest, NYHC bands like Agnostic Front, Nihilistics, Cause for Alarm, Cro-Mags, Reagan Youth, and many others banded together to create a hard, physical sound and culture that thrives to this day. Host Ian Christe (“Sound of the Beast”/Bazillion Points) leads the charge with tracks by those bands plus Sheer Terror, Sick of it All, Leeway, Prong, Youth of Today, Madball, and many others.

For the full history of NYHC, check out NYHC: New York Hardcore 1980–1990, by Tony Rettman

BAD BRAINS – “Big Takeover” from BAD BRAINS
URBAN WASTE – “Public Opinion” from URBAN WASTE
NIHILISTICS – “Kill Yourself” from NIHILISTICS
REAGAN YOUTH – “New Aryans” from YOUTH ANTHEMS FOR THE NEW ORDER
CAUSE FOR ALARM – “Eyes of War” from CAUSE FOR ALARM
AGNOSTIC FRONT – “Your Mistake” from VICTIM IN PAIN
AGNOSTIC FRONT – “The Eliminator” from CAUSE FOR ALARM
CRO-MAGS – “We Gotta Know” from AGE OF QUARREL
S.O.D. – “United Forces” from SPEAK ENGLISH OR DIE
SHEER TERROR – “Just Can’t Hate Enough” from JUST CAN’T HATE ENOUGH
CRUMBSUCKERS – “Shits Creek” from LIFE OF DREAMS
LEEWAY – “Enforcer” from BORN TO EXPIRE
LUDICHRIST – “Blown Into the Arms of Christ” from IMMACULATE DECEPTION
MURPHY’S LAW – “Crucial Barbecue” from MURPHY’S LAW
PRONG – “Aggravated Condition” from FORCE FED
BREAKDOWN – “Kickback” from DEMO 1987
YOUTH OF TODAY – “Break Down the Walls” from BREAK DOWN THE WALLS
OUTBURST – “No Choice” from MILES TO GO
RAW DEAL “Fear in the Streets” from DEMO 1988
SICK OF IT ALL – “Injustice System” from BLOOD SWEAT AND NO TEARS
TOKEN ENTRY – “Jaybird” from JAYBIRD
BORN AGAINST – “Mary and Child” from JANELLE
JUDGE – “New York Crew” from NEW YORK CREW
GORILLA BISCUITS – “New Direction” from START TODAY
MADBALL – “Set it Off” from SET IT OFF