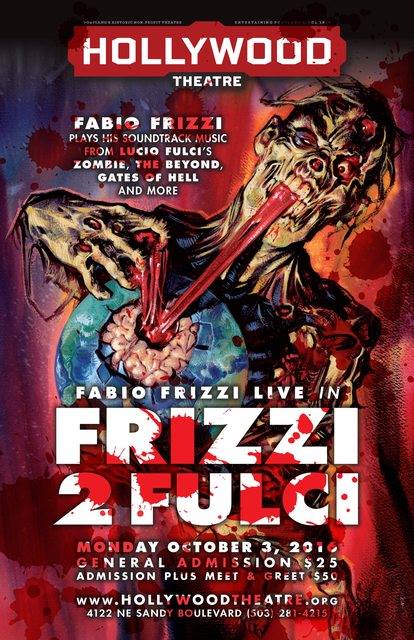 Italian horror film composer extraordinaire Fabio Frizzi and his seven-member Frizzi 2 Fulci band will soon be performing “Zombie Apocalypse” hits from his soundtracks to Zombie (1979), City of the Living Dead (1980), and others; or at select dates his entire score for master splatter director Lucio Fulci’s The Beyond (1981). Frizzi 2 Fulci has played Fabio’s scores for Fulci films elsewhere in the past couple years, but the current North American tour presents a bold new concept—his “composer’s cut” of the film music.

Here’s the official word on The Beyond performance: “An iconic past renewed through a modern stylization of itself, which can now be experienced as the score is performed live to the images of one of the most famous movies shot by this incredible director…”

View dates and details below, then check local venues for ticket information:

Bone up by reading all the gloriously gory details of Fabio Frizzi’s work with Lucio Fulci in our colossal book HEAVY METAL MOVIES.

Then get to know Fabio Frizzi better by viewing his star turn high above the rooftops of Rome in MELLODRAMA: The Mellotron Movie.