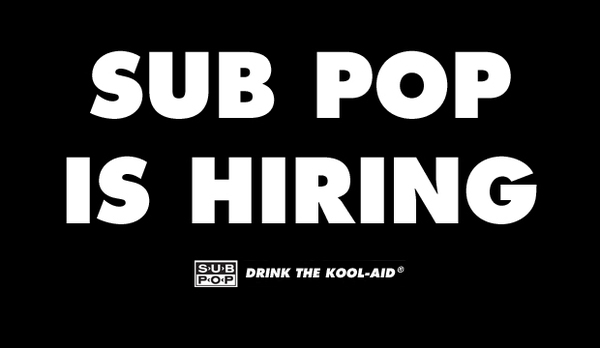 The Weekly cites Sub Pop’s company culture of constant wisecracking; free-roaming dogs in the office; and perks on the order of annual employee trips to locales such as Costa Rica and New Zealand.

The music matters most, though, and several current Sub Pop workers describe for the Weekly the democratic process through which anyone can pitch a band to get signed; how everyone is encouraged and empowered to take an active role in promoting their passion projects; and generally other admirable feel-good truths about the place. You’ll wonder how the citizens of Seattle can stand to see Sub Pop staffers so happy!

Read deeper for the skinny on the company’s annual Loser Scholarship program, a series of financial prizes awarded to local young people actively furthering the city’s arts and music cultures.

Of course, long before Sub Pop was the best employer in Seattle, Subterranean Pop was the best ’zine in the Pacific Northwest. The magazine was published by Sub Pop Records founder Bruce Pavitt starting all the way back in 1980.

Sub Pop U.S.A.: The Subterranean Pop Music Anthology, 1980-1988 gathers and showcases every one of Pavitt’s original issues and includes essays by, among others, Calvin Johnson, Ann Powers, and Gerard Cosloy. Read up before applying for your dream job!

Experiencing Nirvana: Grunge in Europe, 1989 is Pavitt’s photo-journal and frontline account of history as he and Jonathan Poneman took their first big risk during the first year of Sub Pop Records and toured with Nirvana, Mudhoney, and Tad.