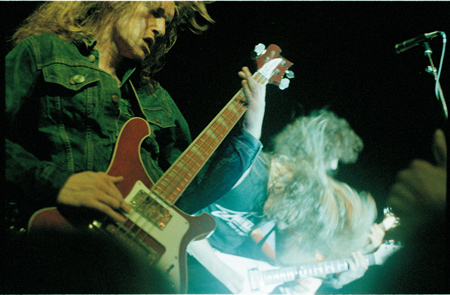 photo: Harald Oimoen, from MURDER IN THE FRONT ROW

September 27, 1986. By heavy metal reckoning, this is a date of singular and extended tragedy. A tour bus carrying the members of Metallica skidded out of control on a dark Swedish road early that morning, resulting in a crash that took the life of bass player and musical visionary Clifford Lee Burton. Hard to believe that he was only twenty-four years old.

Thirty years have now passed, and so many questions continue to gnaw about what could have been.

At the time of the accident, Cliff Burton’s genius had largely launched Metallica to an unprecedented realm of out-of-the-gate greatness over the course of the group’s initial onslaught of masterworks: Kill ’Em All (1983), Ride the Lightning (1984), and Master of Puppets (1986). In fact, Metallica did not even truly become Metallica until Burton came on board. Vocalist James Hetfield and drummer Lars Ulrich, initially basing Metallica in Los Angeles, were lured to the the San Francisco Bay Area like awestruck moths to the flame of Burton’s four-string. His force of gravity was the ultimate.

Today we still wonder what Cliff Burton would have done with the past 30 years. Would he remain a major rager, or would he have altered his course? Would Metallica have navigated the seas of success in quite the same way? And what kind of influence would he exert over the fields of metal headbangers today, had he aged along with us in real time?

Without being flashy or egotistical, Cliff Burton was larger than life. We grieve him continually, and today we rejoice in his memory his string-ripping full-body assault on the bass guitar.