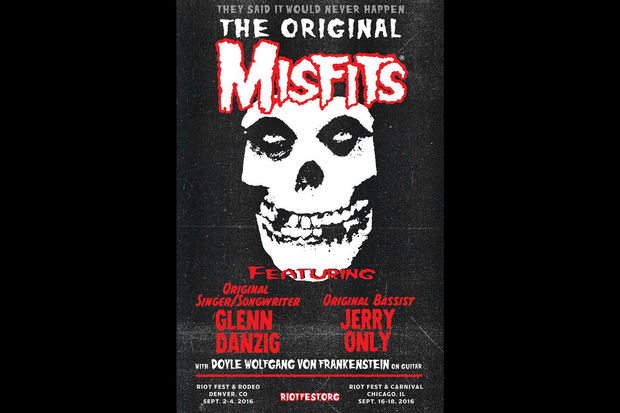 After insisting for decades that a reunion of original horror-punk giants the Misfits would never happen, vocalist Glenn Danzig fronted the reformed group (with Dave Lombardo on drums) at a pair of much-praised Riot Fest performances in September. Fans swarmed the reunion gigs in Denver and Chicago with maniacal passion and, by all accounts, the band seemed bolstered by the love and delivered the ghoulish goods. “Not a lot of people got to see the original Misfits,” Danzig told the New York Times. “Maybe the legends have grown over all these years. And now they got to see it.”

Now, he says the lineup will never play together again. After affirming that there will be no further concerts, Danzig told the Times: “If there’s going to be another Misfits record, I’d probably have to write the stuff. And I’ve got a full plate, so I don’t know.”

The one figure who has actually seen it all when it comes to the Misfits is former Samhain/Danzig bassist Eerie Von. Plus he took pictures. Now Eerie has reissued his excellent book of early images of the Misfits and his own two bands with Danzig. MISERY OBSCURA: The Photography of Eerie Von (1981-2009) chronicles the Misfits from their days hauling plywood coffins into the East Village to play shows, captures Samhain in all its blood-soaked glory, and extends the history through Danzig’s arena-packing heyday.

Now that original Misfits may have returned to the tombs of time forever (again), MISERY OBSCURA remains more essential than ever.