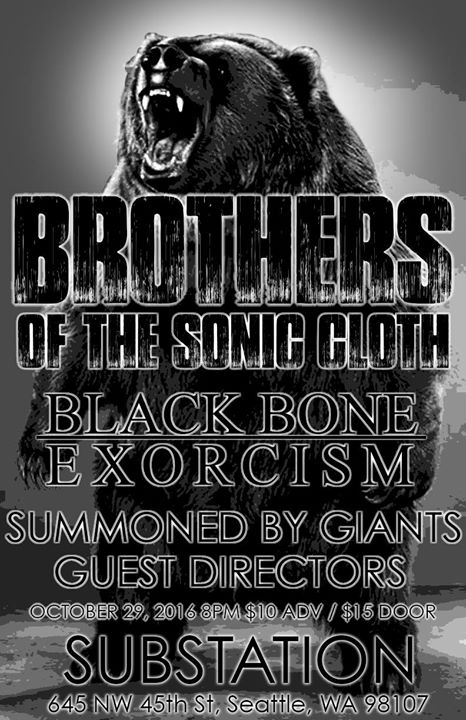 Slaying season has come once more to Seattle. Brothers of the Sonic Cloth, the Emerald City doom circle fronted by “heavier-than-God” Sub Pop-era grunge legend Tad Doyle of TAD fame, has announced that multi-instrumentalist Andrew McInnis has joined the group. McGinnis, formerly of Girth, will debut as a Brother on October 29, unleashing the loud, the crushing, and the sludgy all over Seattle’s Substation venue. He joins the existing crew of Tad Doyle on guitar and vocals, Peggy Doyle on bass, and Dave French (formerly of the Anunnaki) pounding the drums.

Next the Brothers of the S.C. “will spend the remaining months of 2016 and early 2017 preparing the next level of low-end power and irrefutable rhythmic dimensionalism… taking new paths [to] push themselves beyond what they know of their instruments and voices.”

For a you-are-in-the-van crash course in the origins all this heaviosity, pick up Experiencing Nirvana: Grunge in Europe, 1989 by Sub Pop founder Bruce Pavitt, our exclusive and deluxe frontline recollection of TAD’s 1989 jaunt overseas with Nirvana and Mudhoney. Talk about brothers of the sonic cloth!