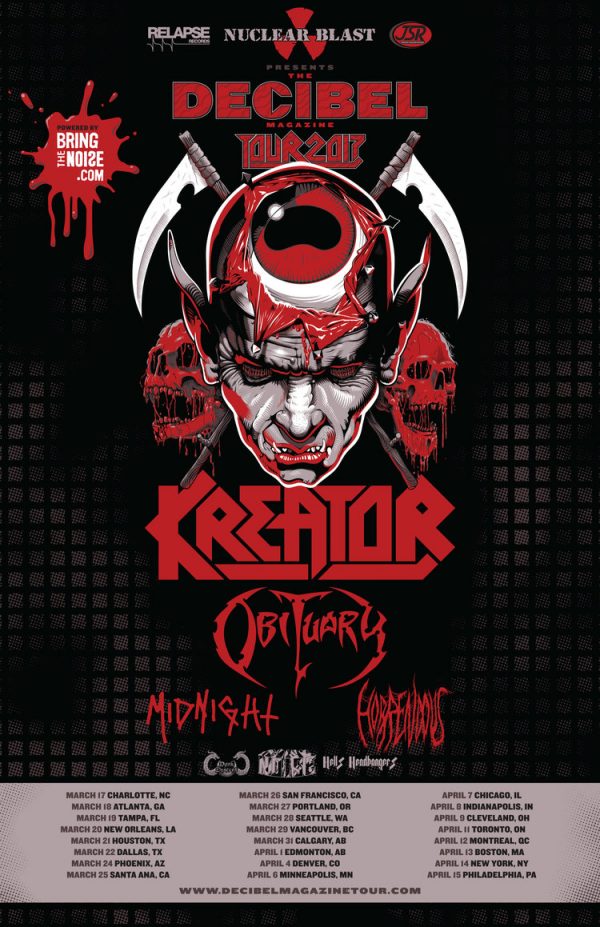 German thrash kingpins Kreator; Florida death metal front-liners Obituary; unholy Ohio marauders Midnight; and expansive Pennsylvania death dealers Horrendous are slated to embark next spring for two dozens dates on the 2017 Decibel Magazine Tour. Discharging the first round of all-out destruction on March 17 in Charlotte, North Carolina, the sixth edition of this most literate of tours is scheduled to lay waste to a good 15,000 miles of major American and Canadian roadways before finally blazing down Decibel’s hometown of Philadelphia on April 15.

Both Kreator and Obituary will be issuing new LPs in 2017. Horrendous took Decibel’s Album of the Year honors for Anareta two Decembers back. The March 2017 Decibel magazine tour issue will feature a flexi-disc by Obituary—an honor that Kreator, Midnight, and Horrendous have previously bestowed upon the publication. And note that Kreator, Midnight, and Obituary all contributed recipes to Annick “Morbid Chef” Giroux’s infamous HELLBENT FOR COOKING: The Heavy Metal Cookbook, so energy levels should be high!

Tickets for the 2017 Decibel Magazine Tour go on sale Friday, December 9 at 10am EST. As you drool blood awaiting this leather-and-longhair mayhem to barnstorm your local music venue, bone up on the backstory of all such madness with Bazillion Points’ screamingly new revised, updated, and expanded edition of the essential reference tome, Choosing Death: The Improbable History of Death Metal and Grindcore by Albert Mudrian.

Here’s where to go for your proper pummeling: