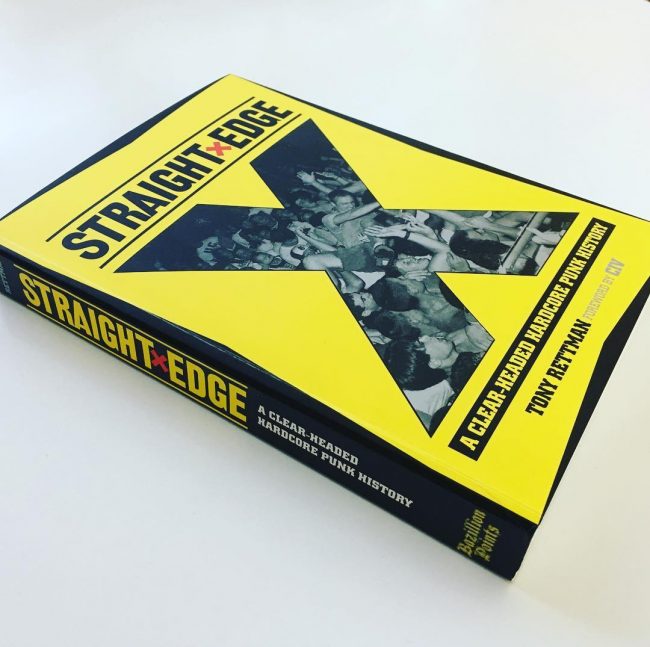 This deluxe softcover runs 400 pages, features a foreword by Civ of Gorilla Biscuits, includes a full-color insert, and will be available everywhere in early November. Especially for preorders, we are including a molded metal badge based on Dave Smalley of DYS’s “X-fist” arm tattoo. We hope you link arms and join us with this latest authoritative and exhaustive leap into the vast demi-world of another powerful DIY subculture.

Starting in 1981 via Minor Threat’s revolutionary call to arms, the clean and positive straight edge hardcore punk movement took hold and prospered during the 1980s, earning a position as one of the most durable yet chronically misunderstood music subcultures. Straight edge created its own sound and visual style, went on to embrace vegetarianism, and later saw the rise of a violent militant fringe. As the “don’t drink, don’t smoke” message spread from Washington, D.C., to Boston, California, New York City, and, eventually, the world, adherents struggled to define the fundamental ideals and limits of what may be the ultimate youth movement.

“What separates hardcore from punk is that punk was just saying, ‘fkck this place.’ Hardcore was saying, ‘let’s make a difference. Let’s make our minds stronger and focus.’”—Toby Morse, H2O

“We were out to create a revolution. We loved the power and energy of hardcore, but not the whole self-destructive punk ethos. We were into being healthy and living clean, mean, and smart.”­—John Porcelly, Youth of Today

“Straight edge became a religion. It’s a very strange feeling to be one of the unwitting founders of this religion.”—Jeff Nelson, Minor Threat

Thank you for reading and spreading the word!