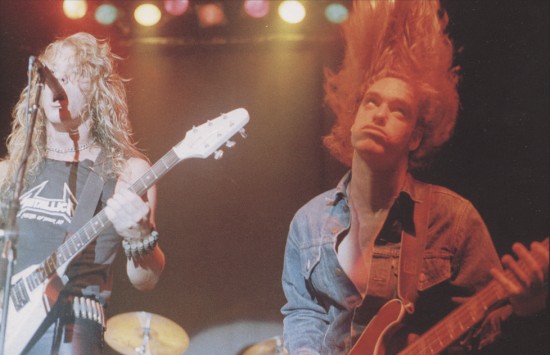 See Cliff Burton in action in scores of photos from his first Metallica rehearsal through the band’s triumphant Day on the Green performance in 1985 in the hefty early thrash metal photo book MURDER IN THE FRONT ROW: Shots From the Bay Area Thrash Metal Epicenter.

METALLICA – “Hit The Lights (1st)” from METAL MASSACRE
METALLICA – “Let It Loose” from RON MCGOVNEY’S 1982 GARAGE DEMO
DIAMOND HEAD – “Am I Evil?” from LIGHTNING TO THE NATIONS
METALLICA – “Jump in the Fire” from NO LIFE ‘TIL LEATHER
EXODUS – “Whipping Queen” from 1982 DEMO
EXODUS – “Dying by His Hand” from LIVE 1983
TRAUMA – “Such a Shame” from METAL MASSACRE II
CLIFF BURTON – “Bass Solo I” from LIVE
CLIFF BURTON – “Bass Solo II” from Live
SLAYER – “Black Magic” from 1983 DEMO
ANTHRAX – “Pestilence” from 1982 DEMO
MEGADETH – “Mechanix” from 1984 DEMO
METALLICA – “No Remorse” from KILL ‘EM ALL