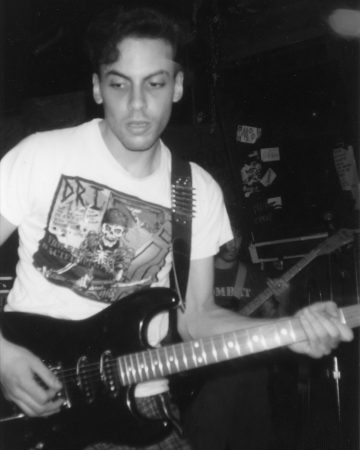 Matt Warnke (vocalist, Bold): “Antidote’s Thou Shalt Not Kill is one of the singularly sickest, most perfect blasts of hardcore ever created. I don’t believe the band itself ever achieved anything close to it live, or had a presence about them in the scene to match the recording.”

Robb Nunzio (guitarist, Antidote): “The Bad Brains were playing Trudy Heller’s on Sixth Avenue and they invited us to get onstage and do some songs. Tommy Victor was in the audience and approached me after the show with some feedback. He knew everyone on the downtown music scene because he was the soundman at CBGB for years and he played in a few bands before he later formed Prong. Arthur Googy from the Misfits was a good friend of mine from Jackson Heights…so I got him to play with me and Tom and that was the earliest lineup of Antidote.”

Dave Scott (drummer, Adrenalin O.D.): “The Antidote Thou Shalt Not Kill EP from 1983 is brutally good. They were one of the heaviest bands on the New York scene. It’s one of those perfect records; the sound on it is amazing, the takes on it are amazing, and the guitar playing is great on it. I loved that record.”

Robb Nunzio: “When I listen to Thou Shalt Not Kill now, I hear the impassioned plea of a struggling young man—or band—crying out for hope and togetherness of some sort in a world gone mad. Even though I wrote it a long time ago, it feels like it could have just been released yesterday in some ways.”

Get yourself the NYHC cure, straight from Tony Rettman’s NYHC: New York Hardcore 1980–1990.

NYHC Band of the Week

The NYHC Band of the Week Is UNDERDOG